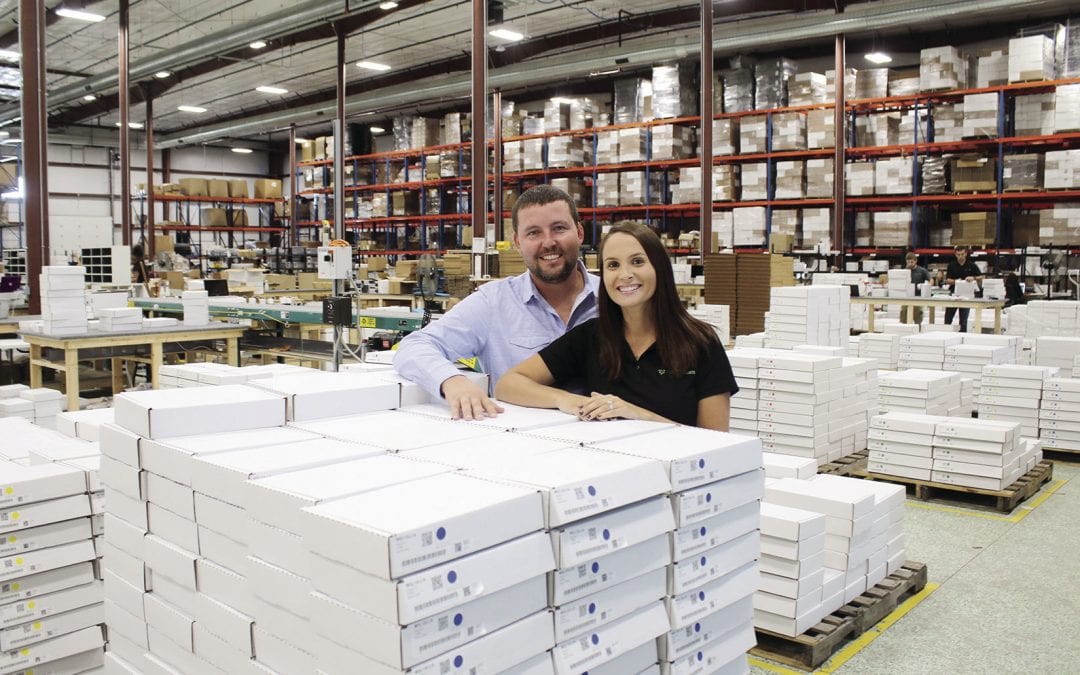 One of America’s fastest-growing private companies is right here in Milton.

The 4-year-old electronic trade-up company made changes this year to prepare for future growth.

At the start of the year, Chicago private equity firm Pfingsten Partners acquired a majority interest in the company. Husband and wife Mike and Diamond McKenna retained a significant equity share of the company and continue in their executive roles at Diamond Assets.

“On a day-to-day basis, you wouldn’t know that anything on the back end had changed,” said Diamond McKenna, who is the chief operating officer.

CEO Mike McKenna concurred, adding the reason for the partnership with Pfingsten was to help Diamond Assets grow from an almost $50 million company to a $100 million company.

Finding a firm that fit culturally with Diamond Assets was very important, he said.

“We wanted a firm that was there to help us grow but was very hands off unless we asked for help essentially,” he continued.

As Diamond Assets looks to expand into international markets, Mike McKenna said that’s an example of one area where Pfingsten will be asked to help.

At home in Milton

At the end of April, Diamond Assets moved into its newly constructed 49,000-square-foot home on Putnam Parkway. Within four years, the company has moved four times, each time to a larger facility, starting with 6,000 square feet, then 15,000 to 30,000.

With the completion of four moves, land behind the new building to expand and a 10-year lease on the building, Mike McKenna said he doesn’t want to move again.

Operationally, he said the new facility is much more efficient.

“We were able to custom-build this one to really suit our needs,” he said. “That’s helped significantly.”

And, the Milton residents said they are pleased to have their business in Milton.

Diamond McKenna said, “We wanted to be able to put our business where we live and really be able to contribute.”

She said contributions include bringing jobs to the community, getting involved in local organizations and events, raising money and giving back to other local businesses.

With the business moving from Janesville to Milton this year, she said they made it a point to get involved in the Milton community as much as they can.

From a business perspective, Diamond McKenna said, “I think Milton has been very supportive both at the city level and working with the Chamber (of Commerce) and Dani (Stivarius, the executive director), even before I became a board member. Milton has an entrepreneur’s spirit. It wants people to come here and grow and be successful. That’s been very evident since Day 1.”

“Milton always kind of had a special place in my heart,” he said. “Everyone you meet here, they’re super friendly, good people, small-town feel. I told Diamond if we were ever going to move or have kids, Milton is where I would want to raise our kids.”

Mike McKenna’s job with Apple inspired the business. When he sold Apple devices, he saw there wasn’t a great solution for schools to get rid of their old products. Traditionally, he said they would throw them away or get little or nothing by recycling them.

With the Apple brand recognition and worldwide demand, he thought there was probably something better to do with those devices that would bring revenue to schools to help them fund their new technology purchases. He told an entrepreneurial friend of the family about the demand for trading up tech devices and he founded the company. A year later, Mike McKenna left his dream job at Apple and joined him.

Looking at where the company is today, Mike McKenna said, “I’m very proud of where we are. We have an incredible team. … I’m a firm believer in grounding yourself with great people because you need great people to do great things.”

Diamond McKenna said when the couple moved to Wisconsin to follow Mike McKenna’s job at Apple, “We didn’t have friends or family here. Diamond Assets has become that family.”

In Milton and across the country, Diamond Assets has 120 employees. Among them have been 16-80 students, many from Milton High School, depending on the time of year.

In previous years the industry has seen business taper off in August, but Mike McKenna reports that hasn’t been the case.

For instance, he said in September, 30,000 devices will arrive from Texas.

They come from all over the United States, even Alaska and Hawaii.

“We help school districts across the US because all of them have needs,” he said. “One of our core beliefs is that kids should have the latest and greatest when it comes to technology. If we can help them do that, that’s important to us.”

Diamond Assets has worked with the School District of Milton on two “refreshes.”

How often the company works with schools varies.

“Different schools have different cycles,” he said. “Some schools we work with yearly, others will do big refreshes every three-four years. It coincides with their buying cycle.”

Diamond McKenna noted that’s true for all school districts with whom they work. “We don’t sell our product into organizations whether it be enterprise or school districts,” she said.

Where Diamond Assets will grow from here, time will tell.

Other companies that first gained national exposure as honorees on the Inc. 5000 list include Microsoft, Dell, Domino’s Pizza, Pandora, LinkedIn, Yelp, Zillow and many more.